Updating the Landmark T.W.A. Terminal at J.F.K., This Time as a Hotel Aviation has declined from the days when air travel was considered glamorous and exciting. But Tyler Morse, a hotelier planning the first hotel within walking distance of the terminals at Kennedy International Airport, is enthusiastically embracing that earlier time.

“Sixty-two was a special year: John Kennedy was president, John Glenn circled the Earth, the space race was on,” said Mr. Morse, the chief executive of MCR, a hotel owner and developer in New York. That was also the year that Trans World Airlines opened its flagship terminal at what is now J.F.K. 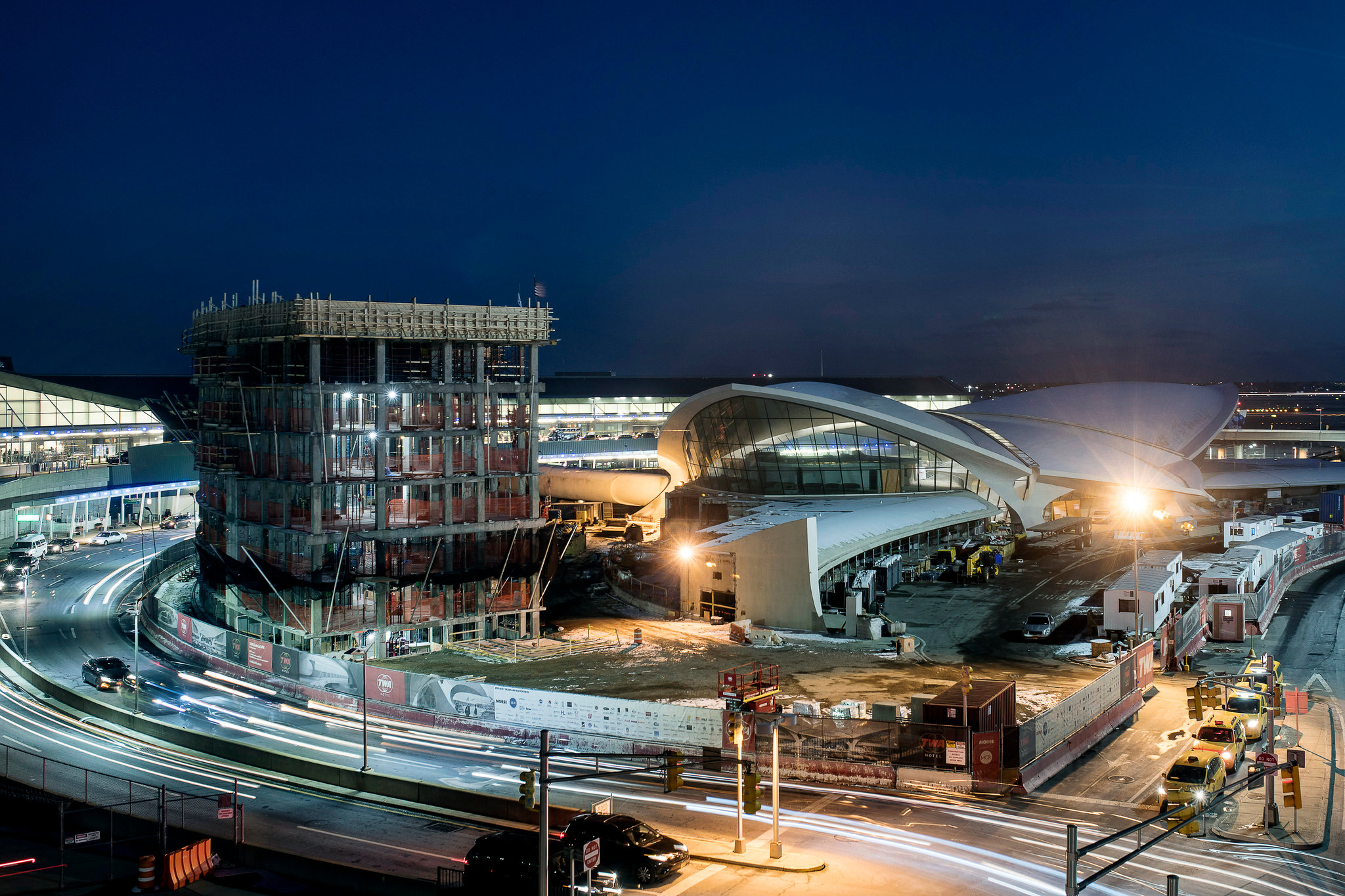 Joy Kisling was a 20-year-old student at Pace University in Manhattan at the time. Some days, she would drive to the airport after school dressed up for travel and just sit in the lobby.

“In those days, you could walk in and sit on the red cushions and watch the passengers go back and forth,” she said. “I loved the atmosphere.”

Mr. Morse envisions a return to glory when the TWA Hotel opens in 2019 in the old terminal. Tucked into a section of what Mr. Morse claims will be the largest hotel lobby in the world, at 200,000 square feet, will be a museum celebrating midcentury design, the dawn of the jet age and, yes, the terminal itself.

“Probably I’m crazy, but I love the building,” Mr. Morse said. “It’s probably one of the most special buildings in America, and to be able to bring it back to life is a treat.”

Mr. Morse declined to speak about construction costs, but his budget for the project has been reported to be roughly $265 million.

When it was built, the steel and concrete, gull-wing-shaped structure designed by the Finnish architect Eero Saarinen was so evocative of flight, the mere sight of it was supposed to initiate the journey.

“He wanted to provide a building in which the human being felt uplifted, important and full of anticipation,” the architect’s wife, Aline B. Saarinen, told George Scullin in his 1968 book, “International Airport: The Story of Kennedy Airport and U.S. Commercial Aviation.”

On that, Saarinen was successful. The T.W.A. Flight Center, as the terminal was called, was bold, imaginative and elegant, according to critics, praise that was matched by what was said about the airline it housed. For many years, T.W.A. was the country’s sole airline with both a vibrant domestic network and international routes, according to New York’s Landmarks Preservation Commission.

Working out of the T.W.A. Flight Center was “an overwhelmingly exciting experience, and everyone around me felt the same,” said Hugh Schoelzel, who went to work for T.W.A. as a flight engineer in 1967 and retired as vice president of corporate safety in 2004.

By the ’80s, T.W.A. was experiencing financial trouble. A refresh of the terminal was planned, but not carried out. In 2001, when T.W.A. was acquired by American Airlines, the terminal returned to the care of the landlord, the Port Authority of New York and New Jersey. It sits empty in front of Terminal 5, home of JetBlue.

Although the T.W.A. Flight Center is widely loved, the Port Authority had difficulty finding someone to save it. An effort in 2013 by a noted hotel developer, André Balazs, to build a small hotel and conference center there fell through.

“Like most people, I believed that the T.W.A. terminal would sit underutilized or empty in perpetuity,” said Nicholas Dagen Bloom, an associate professor who teaches urban planning at the New York Institute of Technology and the author of “The Metropolitan Airport: JFK International and Modern New York.”

For preservationists and lovers of aviation history, the lack of progress was frustrating.

But for Mr. Morse, it was kismet. In 2014, after the Balazs plan faded, the Port Authority issued a third request for proposals, and this time, Mr. Morse said, his company was big enough to take on the task

of renovating a drafty, deteriorating monument to aviation’s golden age.

“It’s a daunting project,” he said. Asbestos and lead paint had to be removed. Then there was the matter of replacing all of the floor-to-ceiling windows with tempered glass.

“You can put 65 million into the building and not have anything on the flip side of that other than a building that’s safe for people to inhabit again,” Mr. Morse said.

Development came with its own set of challenges and bureaucracy, beyond just working within an airport environment. The building’s international fame meant that many opinions had to be considered, including those of city, state and federal landmark agencies that gave the building protected status. Even the Finnish Embassy had a seat at the table, because Saarinen was arguably one of Finland’s most famous sons.

“What they’re selling to the preservationists is that they are sensitive to the importance of the building and its role in aviation history and global architectural history,” Mr. Bloom said of the challenges, which any developer of a landmark property would face.

Altogether, 22 government agencies had a say in one aspect of the project or another, Mr. Morse said. But he learned to be accommodating. For example, after objections were raised about the height of the two hotel wings that extend from either side of the historic terminal in the original plan, Mr. Morse extended their length and reduced the height.

“I would have gone taller with the hotel buildings to get more guest rooms in, and they wanted shorter,” Mr. Morse said. “You’ve got to make the economics of the project work.”

Most other major international airports have at least one on-site hotel, and airports in Calgary, Frankfurt, London, Paris and Tokyo have several, but J.F.K. has never had a hotel in the terminals area. The Ramada Plaza, at the airport entrance nearly four miles away, closed in 2009.

So Mr. Morse is optimistic that the 505-room hotel, which will charge $250 a night, will get enough overnight guests from travelers using the nearby international terminal and passengers on JetBlue, which is an investor in the project and whose terminal is linked to the hotel by two passenger tunnels.

For an idea of what the public space will look like, MCR created a small-scale replica of the original T.W.A. lobby in the company’s offices on the 86th floor of One World Trade Center. There, pilot and flight attendant uniforms, posters, magazines, dinnerware and menus, food trolleys and even reel-to-reel in-flight audio entertainment tapes are either on display or stored in boxes, having been purchased from or donated by T.W.A. employees.

Among those eagerly anticipating a return to the terminal when it is again receiving travelers is Ms. Kisling. After college, she married a man who worked on steamships in the harbor near the airport. But then he switched careers and became a pilot, flying out of the same terminal she enjoyed visiting as a student.

“Who would ever know I would spend so much time in that building once my husband started flying for TWA?” she said. “It was amazing.”